For those who live near Kitai Gorod or have easy access to this area, I found a really nice "niche" supermarket, where everything is ostentatiously expensive, but that has a bunch of gluten-free items spread around the shop. I spotted a few types of gluten-free pasta, gluten-free flours and gluten-free crackers within 3 minutes of strolling around, so there's probably much more! And the prices aren't as bad as the rest of the supermarket, so I would say it's really worth a look.

This supermarket is called Gastronom and you can find the email address on the website. And this is where they are located. 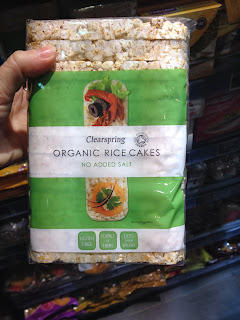 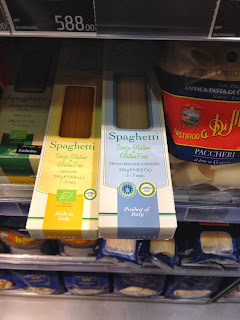 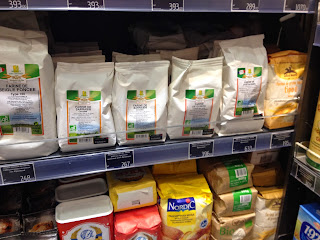 Beside this very very upmarket shop, there's also the 7th continent that has started selling gluten-free pasta and crackers. Well, it's usually only one pack per shop, but it is still an improvement! It is also in this shop that I had found the Daim cake which, by the way, is delicious!

They have a huge number of shops all around Moscow, the first one being on the Old Arbat. 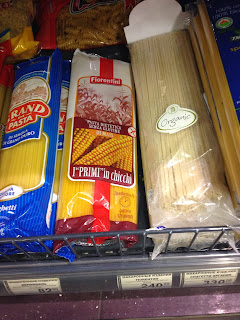 A good day to you all and I hope you enjoy the snow as much as I do! 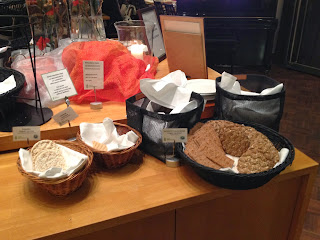 If you want to go abroad for a few days and are craving good gluten-free food, I'd recommend going to the Nordic countries. They are rather close to Russia - especially Finland: the Helsinki-Petersburg train takes 3.5 hours - and they are basically gluten-free heaven on Earth.

I have been to Norway, Sweden and Finland (I don't know about Denmark or the "further" countries) and my gluten-free experience was equally satisfying in each of the three.

My first example may not be your first priority but I think it illustrates rather well what I mean: the only 4 European countries in which McDonald's (and many other fast food chains) offer gluten-free hamburgers are Norway, Sweden, Finland, and then Spain. This obviously implies that the great majority of other restaurants include gluten-free options, and with a very low risk of cross-contamination.

This also means that calling the hotel before your trip to ask for a gluten-free breakfast is unnecessary! Most hotels have a gluten-free corner on their breakfast buffet and will give you toasted bread on demand. The same goes for cafes, which most often store at least one gluten-free (and good) item.

So, really, the main issues when going there is that food and (especially) alcohol are really expensive, and that you may nevertheless decide never to go back home!

If you have any information on Denmark or, say, the Baltic countries, do let us know! It would be interesting to see where it is easy to travel as a celiac. 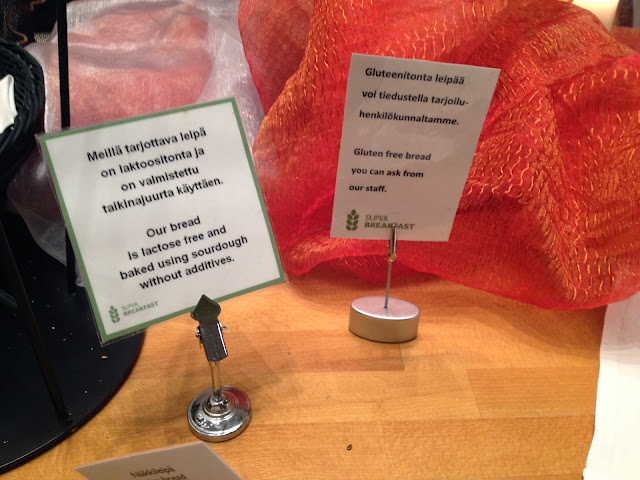 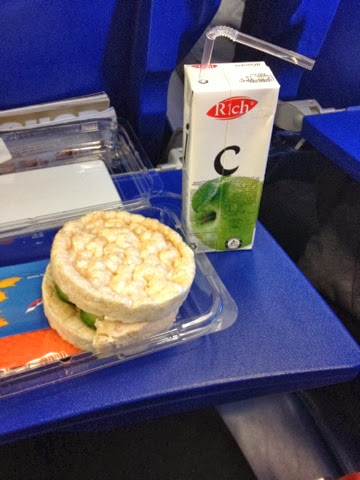 Two weeks ago, I flew Aeroflot to go to St Petersburg and had booked my ticket with a gluten-free snack not to have to bring my own food. And I really regretted it. The standard snack did not look delicious, but the gluten-free one was really, really badly done. Instead of the standard sandwich, I had a piece of boiled chicken (not even salted), with two slices of cucumber stuck between two rice crackers. And it really tasted like they had assembled it 3 days earlier - the cucumber slices had no taste and their juice had made the crackers all soggy.
In short, if you are planning on flying Aeroflot, I'd advise you to bring your own food..

I have had a really good experience with a few other airlines though . Last year, my boyfriend and I went to Turkey for a week and we flew Turkish Airlines (surprisingly..). Although I had exactly the same meal on the way there and back, it was definitely my best gluten-free experience on a plane! They had a really nice bread, which they'd heated prior to serving it.

Then there's China Southern which made things simple, but correct: a fruit plate, rice crackers, and shrimp with rice. 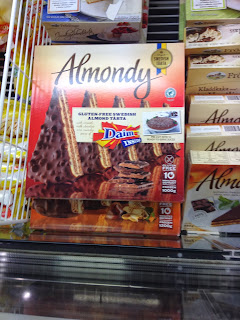 I was strolling around the supermarket near work (Sedmoy kontinent at Paveletskaya) when I stumbled upon a Swedish gluten-free Daim's cake in the frozen section!
Not only is it gluten-free but it's made with Almond and Daim's, two of my favourite flavours!
Since I'm spending (western) Christmas here with my sister, I'm definitely buying it for desert!

I was also told on expat.ru that Starbucks make gluten-free cakes now. Unfortunately, they seem pretty neglectful on the issue of cross-contamination...

Have you had any pleasant gluten-free surprises in Moscow?
Tell us in the comments, it'll help everyone!
Publié par Unknown à 05:27 Aucun commentaire: 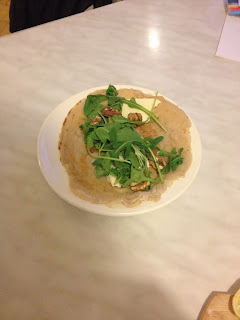 Last week, I talked about the Russians' love for buckwheat and briefly mentioned buckwheat crepes. Well, last night, I finally had a chance to make them!

I found buckwheat flour in the massive Perekrestok (previously Karusel) in Metropolis (metro Voykovskaya); it's called мука гарнец греченая (myka garnyets grechenaya). I also used a bit of my own gluten-free flour but that is optional. I used this recipe:

Put the flour in a bowl and slowly add water while whisking, then add the milk, egg and salt and mix until smooth. The dough has to be very liquid, add water if necessary. Leave to rest for at least an hour.

Put a flat pan over medium-high heat and wait for the pan to be really hot (this is really important!). Grease the whole pan with a little bit of oil (I recommend using a brush or kitchen paper), then pour enough dough to cover the whole surface; tilt and rotate it to create a nice think disk. Wait approximately 1-2 minutes
(depending on the thickness of the pancake), carefully lift the crepe with a spatula (or by shaking the pan horizontally) and flip it. At this stage, you can add the filling or just wait a minute and set aside.

I recommend greasing the pan every two crepes for best results.

I made three types of fillings last night:
-The first one was with goat's cheese, rocket salad and walnuts.
-The second was with chicken and the Russian local substitute for ketchup (which I find actually better than actual ketchup),
- and the third was a sweet one with butter, sugar and lemon juice

It's a really easy recipe for a delicious meal, and you can make fillings with pretty much anything you like! 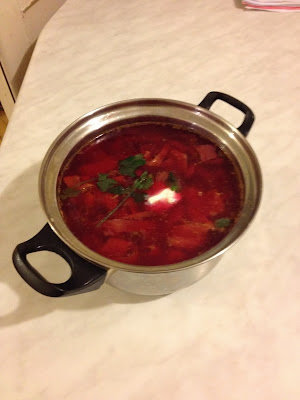 So this is a bit far from the gluten subject but I thought it would be a good thing to show food ideas that don't necessarily involve wheat substitutes.

Borsch (or borscht, bortsch, borstch, borsh, and borshch according to Wikipedia, you can basically write it any way you want so long as the sh and r sounds are still there) is a very popular beetroot-based soup in Russia and Eastern Europe. Its main advantages are that it includes potatoes (for the carbs) and no wheat flour is added.
It is a great winter dish and, when you make it, you usually have enough soup for at least 5 dinners!

I made some last night and it tasted delicious. The Russians usually add smetana (a type of sour cream) on top when serving it for extra self-indulgence!

The traditional version uses beef meat and the process becomes very lengthy, so for this version I used my mother's technique (put it all in one pot and cook it) and I did not put meat in.

Here are the ingredients:

The traditional version uses beef meat and the process becomes very long, so my version used my mother's technique (put it all in one pot and cook it) and I did not put meat in. I cooked it all for about an hour. The herbs are optional but when it comes to my tastes, the more herbs, the better!

The more elaborate version with beef meat is also worth a try! 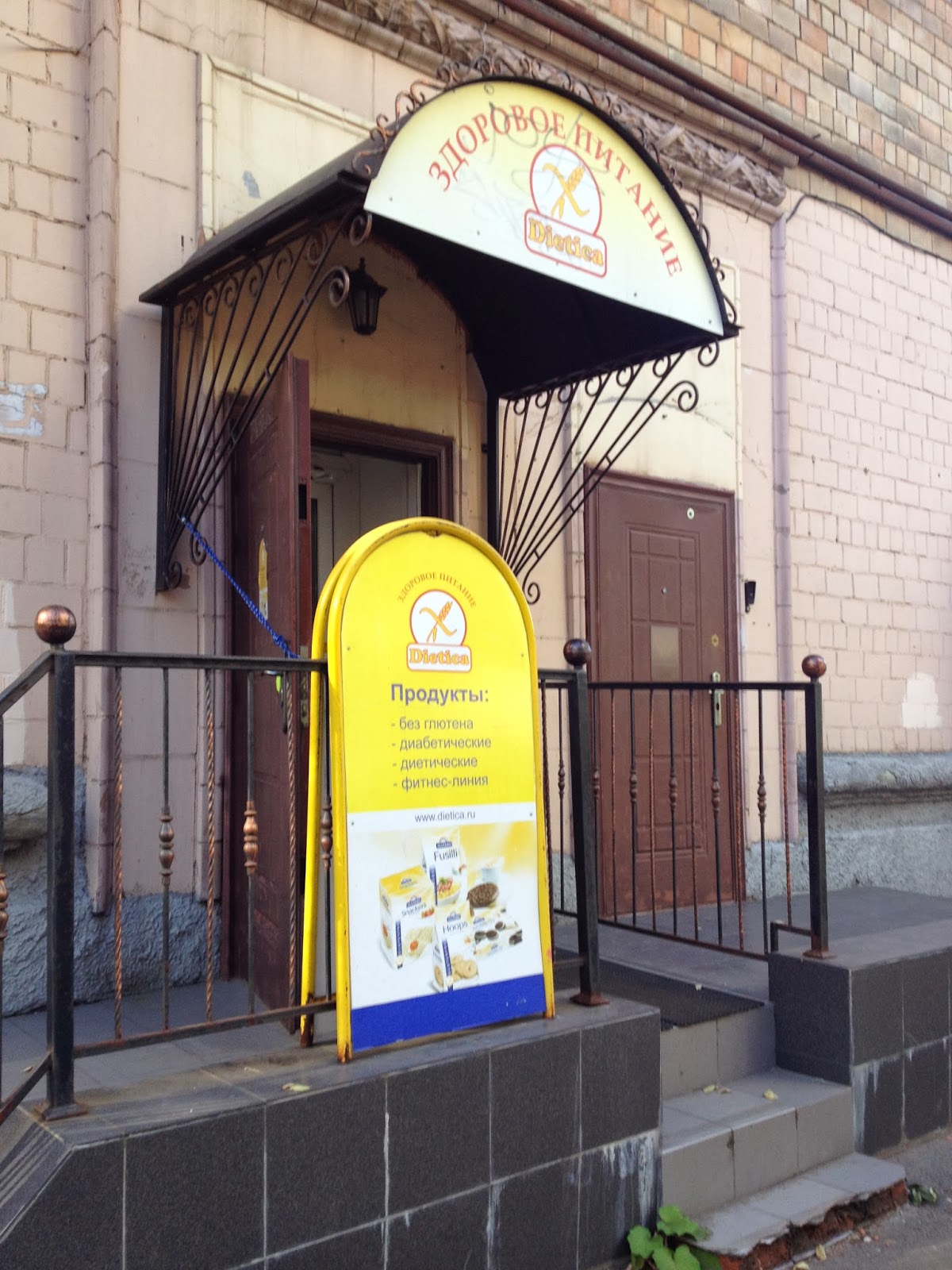 The best way to get our beloved gluten-free substitutes is to bring them from abroad or have relatives and friends bring them when they come visit us. That's definitely the cheapest way. But for those who don't have the chance to do that, Moscow happens to have (at least) two shops dedicated to gluten-free products and they have more than enough variety on their shelves.

I went to one of them yesterday and really felt I was in gluten-free paradise! They have all the brands you can find in Western Europe (mainly German and Italian brands) and actually much more than I'd seen in the typical organic/gluten-free shops in Paris or London. I even found gnocchi, which I haven't eaten since I became intolerant!

I expected the prices to be exorbitant and they turned out to be quite alright! Obviously, they are more expensive than in Europe, but it really is not too bad (considering we've all had to get used to paying more for our pack of pasta). Moreover, they often have generous discounts (актции/aktsii) on a series of products.

Check out the amazing range of gluten-free products they have on their website!

The shop I went to is in Dinamo, 10-15 minutes away from the station by foot. I have not yet been to the second one but I will pay them a visit sometime this week. It is near the metro station Marksistkaya and is about 10 min from the station.
Find them on google maps.

Here, I hope this helps some of you as I found this discovery to be a very pleasant surprise! 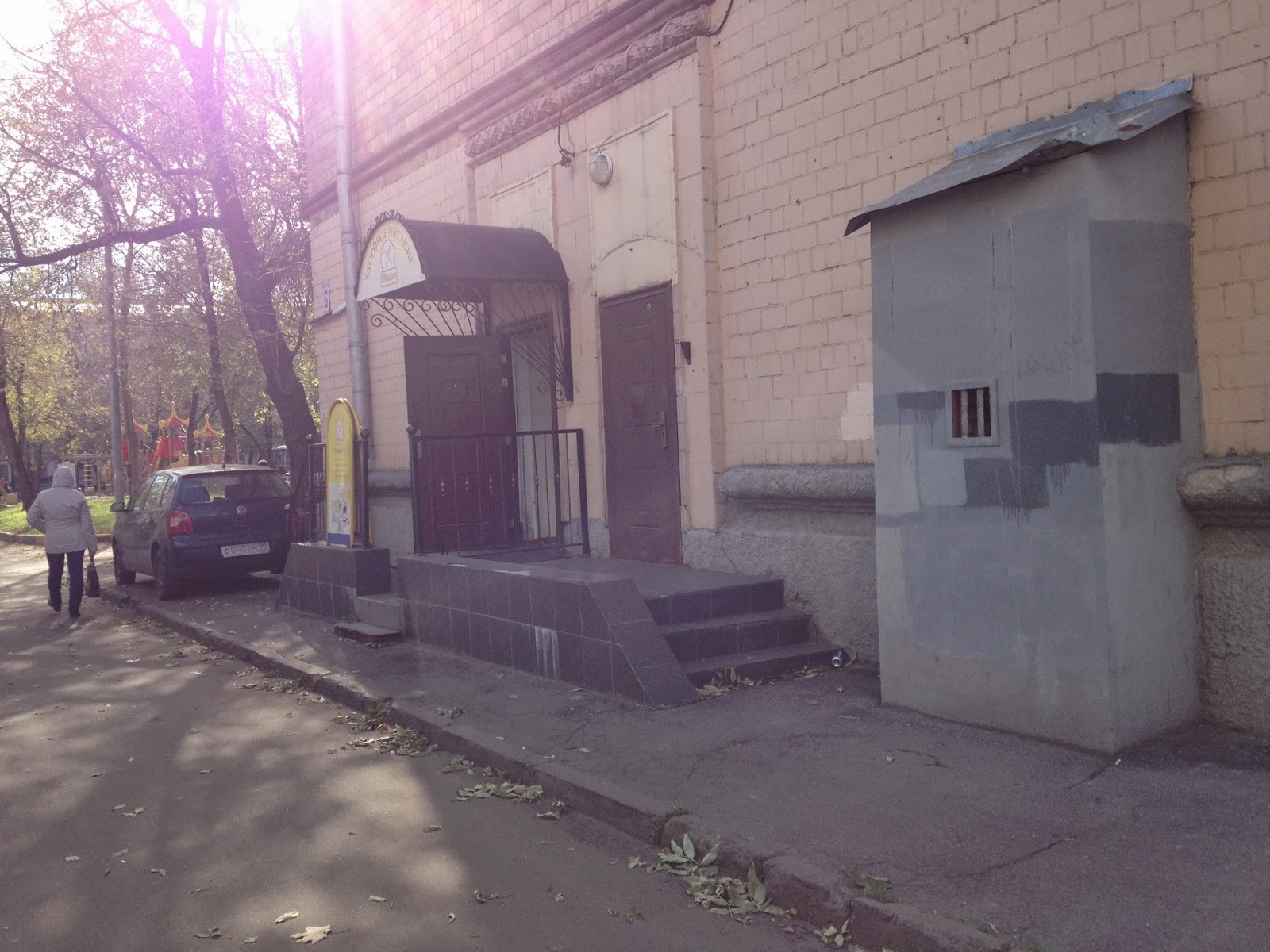